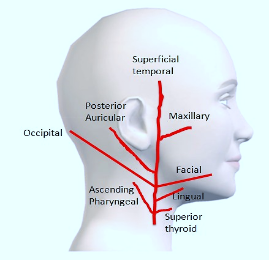 Arises below the level of the greater cornu of hyoid dividing into terminal branches at the apex of the thyroid lobe.

Arises behind the lip of the greater cornu of the hyoid bone. It passes deep and medial to the hyoglossus. Supplies tongue, buccal mucosa and floor of mouth.

Arises anteriorly above the lingual artery. This artery passes deep to the posterior belly of the digastric. Pulsations of this artery are palpable at the base of the mandible. It supplies the face, submandibular gland and the tonsil.

Arises from the external carotid artery, above the digastric muscle and stylohyoid muscle, opposite the apex of the styloid process.

Branches outside the carotid triangle:

Arises at the neck of the mandible. It supplies the parotid gland, temporomandibular joint and masseter.

It is the terminal branch of the external carotid artery. Supplies the mandible, maxilla, teeth, palate, muscles of mastication and cranial dura mater. 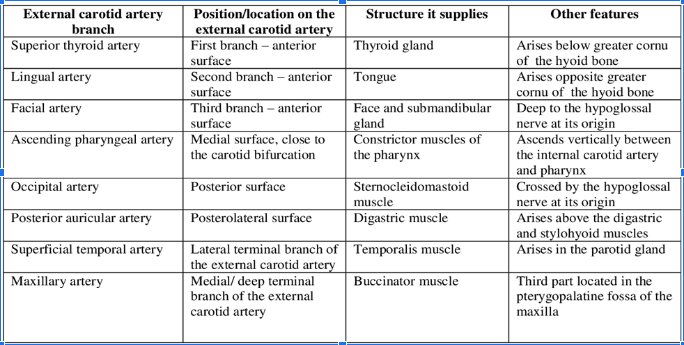