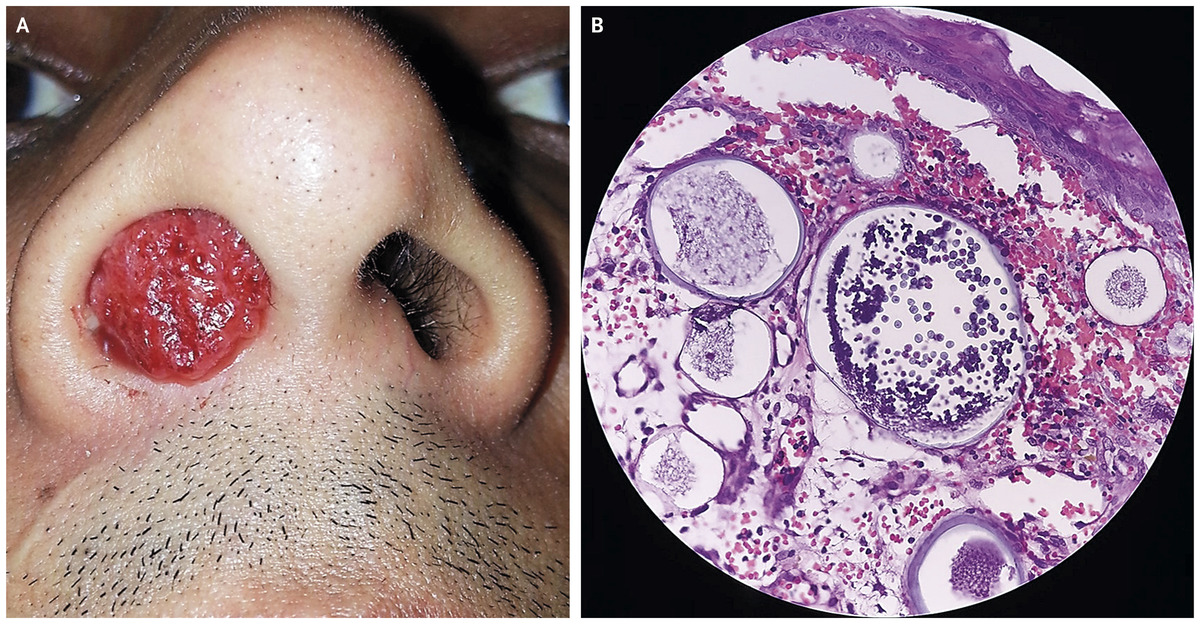 Definition: Rhinosporidiosis is a chronic fungal infection of the mucous membrane of the nose and nasopharynx but occasionally involving the lips, palate, uvula, sinuses, larynx and skin. Aetiology: Causative Organism: The disease is caused by the fungus Rhinosporidium Seeberi. This organism was previously considered to be a fungus, and rhinosporidiosis is classified as a fungal disease under ICD-10. It is now considered to be a protist classified under Mesomycetozoea. There are similarities between Dermocystidium and Rhinosporidium when using light microscopy, but substantial morphological differences between the groups exist. There is some evidence that DNA extracted from purified uncontaminated round bodies (Rhinosporidium seeberi) is of cyanobacterial origin. Modes of transmission: (a) Air borne: Dust dung of infected cattle. (b) Water borne: Bathing in contaminated waters. Symptoms: (1) Epistaxis with viscid nasal discharge. (2) Nasal Blockage. (3) Difficulty in swallowing can occur when the characteristic polyps grow posteriorly. 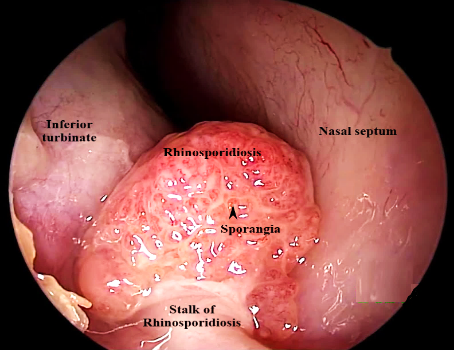 Signs: (1) Anterior rhinoscopy, reveals, friable strawberry like, masses studded with sporangia.
(2) Extent: The masses may spread from the nasal septum, vestibule and to the nasopharynx.
(3) The mass is extremely friable and bleeds on touch. Histology: Microscopic examination of the nasal discharge will show spores. The polyps have a vascular fibro myxomatous stroma with round or oval cells containing sporangium. 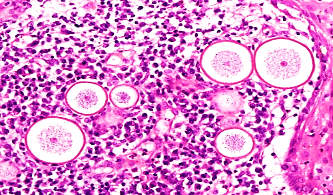 Various medical treatments have been tried.

Surgical excision can be done with diathermy knife, cryosurgery, or laser surgery. During surgery, cauterization of the base of the pedicle is advocated.

Recurrence rate is high. During surgical excision, utmost care of asepsis must be taken as the spores can give rise to new seedling to the patient and as well as operating staff.

FESS helps in minimizing the recurrence rate, as the pedicle is removed and cauterized under direct vision. Recent advances suggest usage of coblation to excise the rhinosporidiosis.