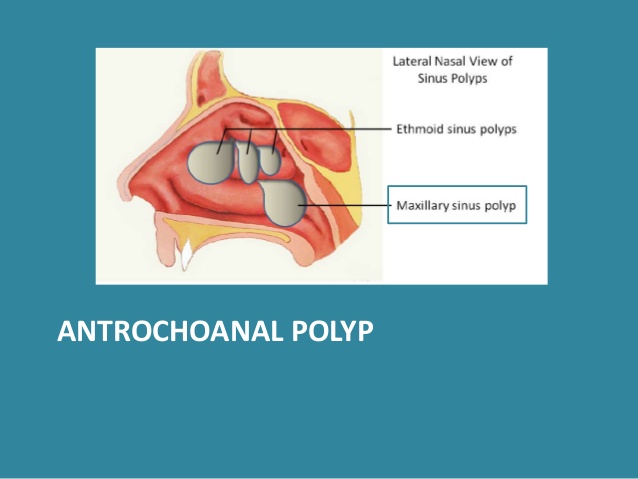 Definition: Antrochoanal nasal polyp is a prolapsed, pedunculated, painless, pearly white oedematous nasal mucosa, lining the maxillary sinus. It is also called Killian’s polyp. Aetiology: Pathology: It has three parts. The polyp can extend into the nasopharynx and oropharynx as it enlarges.
Symptoms: a) Nasal obstruction: It is usually unilateral not relieved by nasal decongestant drops. Obstruction may become bilateral when polyp grows into the nasopharynx and starts obstructing the opposite choana.
b) Nasal discharge: It is unilateral, mucopurulent and occasionally blood tinged.
c) Postnasal drip: It is present and mucopurulent in nature.
Many patients come to the specialist with a chronic cold, quite unaware that they may be having an antrochoanal polyp. Signs: a) On Anterior rhinoscopy- A smooth greyish mass covered with nasal discharge may be seen. It is soft and can be moved up and down with a probe.

b) Posterior rhinoscopy may present with a globular mass filling the choana or the nasopharynx. It may hang down behind the soft palate and present in the oropharynx when it is very large in size. 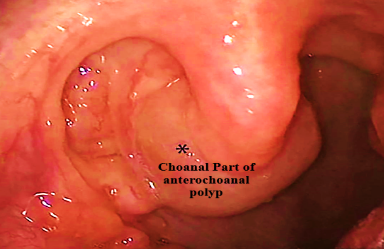 Investigations: a) X-ray of Paranasal Sinuses: This will show the extent of the disease in the sinuses. A polyp seen as a soft tissue shadow in maxillary sinus with convexity upwards.
b) CT Scan of the Paranasal Sinuses: This is the investigation of choice, prior to surgery. CT Scan reveals the extent of the disease, orbital involvement and vascularity. It is mandatory in revision cases due altered anatomy.